New York never had a better mayor. Not for a minute, not for a second. Oh the impossibly sad news, the world has lost Ed Koch today. He was the kind of man who should have lived forever.

First met Congressman Ed Koch along with a city who barely knew his name or existance. I was producing Barry Farber’s WOR radio show and when Barry had to drop the radio to run for mayor, Ed Koch was in the field of at least eight that remarkable hotly contested year, 1976 I think? and I was all of a sudden part of the Farber for Mayor campaign. The candidates also included Mario Cuomo, Bella Abzug….and the dark horse from nowhere, freshman Congressman what? who? Ed Koch…won.

He never lost step with a single New York resident. Walking the streets easy and open, sounding like the guy on the business end of every deli, the cab driver, the good uncle, and waving, asking loud and clear: “How’m I doin?”

I think Ed Koch liked power and control, but knew how to share, how to advise. And he had little interest in accumulating wealth; liked the humble, Jewish, underdog’s lawyer, citified intellectual content he never lost ~~ along with his big rent-controlled NYC apartment for less than $500 a month.

And Ed Koch loved City Hall. And the man loved politics and was a superb politician. I can’t think of anyone I can say that about today. Zero, zilch, nada. 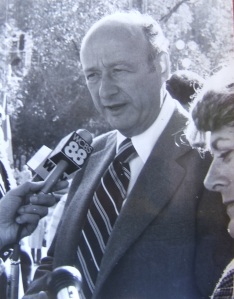 The next time I met Mayor Ed Koch he’d gotten Geraldine Ferraro, newly elected Congresswoman from Queens, into the city at 7 A.M. for a subway stop and meet and greet the press. No one had slept for days, we’d gotten the confirmation of her win after midnight, and now at dawn, doing the right thing, Koch insisted. Ferraro had huge political energy, too.

The last time I met Koch was as a writer-producer for CBS-TV News, and he held a press conference at City Hall to give the Key to the City of New York to beloved actor Jimmy Cagney. Mr. Cagney was in a wheel chair then, totally electrifying to a stand-only sea of reporters, sweet, brilliant, and so touched he cried.

Bless your heart, Ed Koch, for being so unashamedly compassionate, so true to your town, so honest with that city, pulling NY out of a recession into good times, and so forever filled with hope for the next best day. Boy oh boy, we will miss you.